It was in a house just nearby in Akpakpa, Cotonou that I began dreaming big for Benin. Maybe the seeds were sewn long before, I don't know. We dreamed and we wrote lists as we felt the Holy Spirit breathe through our hearts. I was a part of the Advance team preparing for the ship to arrive in August 2014.

We allowed ourselves to fall in love with this Country. We dared to believe that mountains could be moved.

I think it was about 10 days before the ship was due to arrive that we heard it would not be coming. Ebola was spreading and we were afraid that our ship would be like a magnet attracting people in desperate need and make the situation a whole lot worse.

So you can imagine how it felt. Total disbelief. What on earth did God have in mind? What should we do with all those dreams?

And so 2 rich years later, the coast was clear and we made our way back.

A few months back, I shared some thoughts about redemption – regaining something that was lost.

You can read the Mercy Ships statistics reports if you want to see what we’ve ‘done’. But as we all know, it is about so much more than that. Who can measure lives transformed? Who can count the seeds that have been sown? Who can know the dreams kept quietly in each of our hearts that have seen God’s powerful touch?

As we wrap up and say our goodbyes, all I can think of are the things He has redeemed.

Back in 2014 our Medical Capacity Building programs were still in their infancy – 2 years on and the people of Benin received so much more than they would have done then. Just today I met our key contact at the University Hospital and do you know what he said? He was saying thank you and I was returning my thanks… and he again returned his. I playfully said, ‘NO! It is us who are thankful!’, and with that he took a more serious tone; he told me to listen. He said that other missions come and they have compared us. He said that we are different. Others say they will do good things, but it is not always the case. Mercy Ships do what they say.

In the words of one of our local Day Crew as he shared his experience translating for our Anaesthesia mentoring participants, ‘…it’s about something so much bigger than me'.

I could tell you so much more, but what you must know is that it’s never the end of the story.

It's been a wonderful 10 months here in Benin and now it's time to close our doors and take a chance to breathe. I will join the ship again in Gran Canaria at the end of July ready to sail to our next destination: Cameroon. But first some English fresh breezes, birdsong, friends & family and a few weeks of french study in Switzerland.

Keep on dreaming precious friends, let His love and power invade every injustice and every thing you carry in your heart... 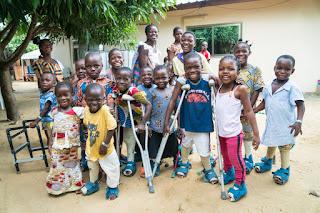 Posted by Nursie Kirstie at 22:53 No comments: