In a few short days, I will say goodbye to this wonderfully rich place. This last month, we have had numerous final ceremonies to honour the people we have had the privilege to work with. To name a few.... 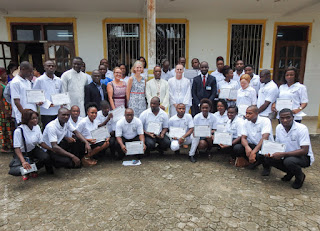 34 participants celebrating at the Agriculture graduation 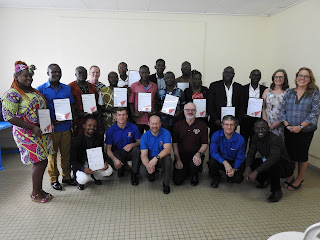 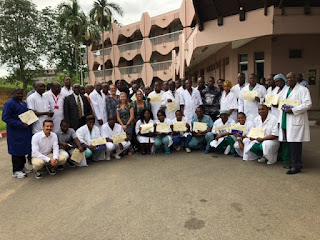 42 participants including those from our Surgeon, Anaesthesia, Nursing, Physiotherapy, Biomed and Sterile Processing mentoring programs at Hopital General receiving their certificates last week. 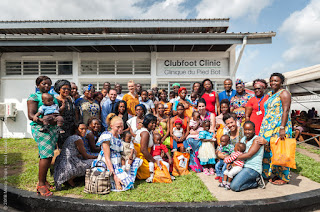 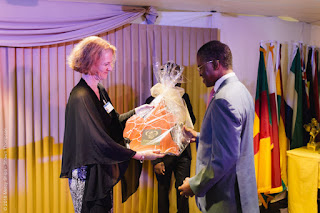 Our Managing Director presenting a gift to the Minister of Health at our Thank you Ceremony earlier this month. 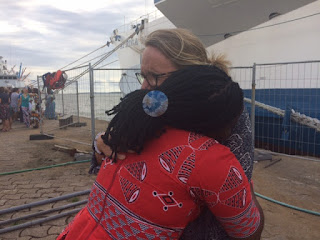 Last Friday we said goodbye to 270 Day Crew - our Cameroonian team whom without we would have achieved literally NOTHING!

Life doesn’t get much richer than when you get to celebrate the power of God at work and the tremendous things that we have achieved together. There have been 2746 life changing surgeries and 1564 people have been a part of our medical capacity building programs! Who knows how many people these will go on to impact.

In this place I have found friends to share the deepest parts of my heart, my hopes and dreams - and failures too. When you get to rub shoulders with people who see you for who you are, who challenge you to see beyond what meets the eye and who call you higher, it’s pretty special.

I’ve been challenged a lot lately as I think about leaving a place that holds so much of my heart and my understanding of who I am…. I’ve been reminded that I am still me, wherever I go, and that God is too. I am committed to a continent that I love so much, to a people who understand and express joy far more beautifully than I have ever experienced and to a culture that teaches me how to always put people first. I am committed to continue to fight fiercely for light to overcome the injustices that continue to affect so many.

Our God is extravagantly good. He’s kind, He’s gracious, He’s full of mercy. He literally gives hope to the hopeless, He sets people free and He clothes those who were once mourning with pure joy. I have witnessed it, I can testify to it and even though I come away with some battle scars, there are a million faith building victories that I hope will fuel my future steps.

Let’s not stop dreaming friends. We can’t. We are here on Earth for a purpose and the best is yet to come. 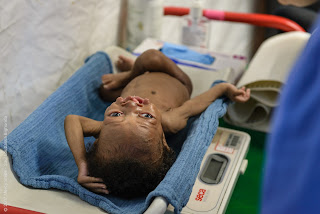 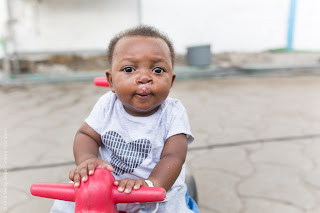 This is what love looks like. Baby Paul at the brink of death, now facing a life full of opportunity. Unbelievable. More than we could ask or imagine. It's been a privilege to serve with individuals who pour out such a reckless kind of love.

Here's to more as we watch the next part of the story unfold.

Thanks for friendship and love forever, KWW
Posted by Nursie Kirstie at 21:23 No comments:

I wonder how you capture the end of a season -- knowing that it will never be quite the same. I have truly been transformed by the power of faith, hope and love.

Traveling throughout Benin a couple of weeks ago has given me time for thought. We wanted to invest some time to visit some of the hospitals who we delivered training to a year ago and learn a bit. Did we do what we said we’d do? How could we do better next time? And how can we encourage the teams we met?

We had the privilege of observing several operations and some beautifully humble teams hard at work. Without surprise, the majority of surgeries that happen in many hospitals in Benin are Caesarian sections. Sometimes planned, sometimes emergencies and sometimes really really dire emergencies. As you drive past the villages whose population is served by the 'Hopitaux des zones' you begin to understand the kind of people who end up through their gates and on their operating tables. People without any money, without any belongings except enough for today, and maybe not even that. People who try all sorts of other solutions when faced with obstructed labour, before they may arrive for help.

And so I was delighted to witness the first breath of a precious baby girl. Her tense little limbs lifted out of the safety of her first home to embrace the coolness of the operating room. Held by her ankles, she was welcomed into the world and swung (gently) in front of her mother’s face to show she was a girl before being whisked into the comfort of the midwives skilled hands.

I wasn't present for the next one but I enjoyed hearing the cry that announced her arrival.  --- We had barely noticed your mother enter the operating room - we were busily chatting to the staff right outside, asking questions about the training, and before we knew it, you were out! Abdomen open and out you came. I didn't even hear a whimper from your brave mother and there she was, all alone. Your tufts of dark curly hair and your full volume cry gave me a glimpse of who you are. Fight beautiful little one, tell the world you've arrived! I prayed that your precious little feet would be blessed and that you’d be a woman of courage, influence and power.

But then there was the one whose cry we didn't hear. Your mother was too late. Who knew what kept her - fear, money, geography - I don't know. Her uterus had ruptured and the focus was on saving her life.... I didn't see you, I didn't know you, I don't even know from where you came. But I saw your mother there - groaning just slightly - as her abdomen gaped open - and I saw that she was tough. You were her tenth baby. Only 6 have survived. I imagined what that must feel like. I imagined how inevitable some of this must be - to lose a child - and I hated it. I hated to think that this would never be me. I hated to think that I would always get the health care I needed and when I needed it. My heart rested as I imagined you with Jesus. And the words of our driver from that morning rang in my head, ‘we do nothing, except through Him; we only wake up because of Him; we only live another day, because of Him’. It says nothing to the injustice and the grief, but I lifted up my eyes and gave thanks.

My last few years have been full of stories of faith -- and hope -- and love and I am so thankful.

As I sat belted on the plane back to Douala after 10 magnificent days in Benin, my eyes filled with tears. It's the relationships that undo me.

That same day, I had walked into CNHU - the hospital I had spent hours at in 2014 as a part of our Advance team, carefully building foundations for a field service that took 2 more years to start than we planned. Ebola sent us sailing 1000s of miles in the other direction and meanwhile Benin waited patiently. The smiles were slightly wry when we returned 2 years later; '…we told you Ebola wouldn’t come to us!'. I remember the reunions and the satisfaction of delivering our belated promises. How rich it all was. And so nearly 4 years later from our original meeting, I walked into the ENT department at Cotonou's university hospital. I immediately spotted the department’s chief. His back was towards me but as his colleague signaled to him that someone was approaching, he turned. 'Ce n'est pas vrai!'  With hugs and kisses, he sent us to wait in his office. Others were there also waiting and so we attempted to wait outside but it didn't take long before the office dwellers were kicked out. I resisted, ‘…ce n'est pas nécessaire!'.... but the response : 'C'est absolument nécessaire! C'est Mercy Ships! C'est nécessaire!'  - and we took our seats. I could hear the corridor ripples - 'Mercy Ships sont la!' and I saw the photo of me and others on his wall.

I knew already that relationships were what it was all about, but that day I learned it some more. The chief of the department and the head nurse told us over and over, ‘…you're different to other missions! Please tell your people that. You must pass it on. You're different. You're the best. Others come, they don't speak the language, they operate in our operating rooms and they don't even tell us what they are doing. Mercy Ships, you are different! You didn't forget us. You came to say hello!’.

And even as I write this, tears are streaming down my face. Somehow it's too much. Somehow my God did more than I could ask or imagine. He made it all new. He worked it all together for His glory. He did it again. Who knows how to quantify that in our statistics or our reports to our amazing donors. Love deposited? Is that what we'd call it? I don't know. But I see love in that moment and it's one of the most powerful lessons I've been learning. Relationship matters. And it's why I so desire to stay a part of what Mercy Ships do. We’ve seen it here in Cameroon as well and as far as our medical capacity building programs go, I can only describe what I see as an open Heaven. Immense favour. Wonderful relationships and a lasting impact that will impact generations to come.

He does it every time. When we submit ourselves, when we let Him have His way, when we love one another - He redeems, He creates, He lets love abound.

On my journey I noticed the flowering trees that apparently only flower in the dry season and when all the other trees around have lost their leaves, their beauty stands out even more. How wise they were to drink in the rain when it came and to use it for glory when all around was dry. Jesus, make me like these trees! I want your glory to shine around, I want to reflect it, even when all around is barren and dry. Let your sweet aroma and stunning beauty somehow shine through. And it does. All the time. 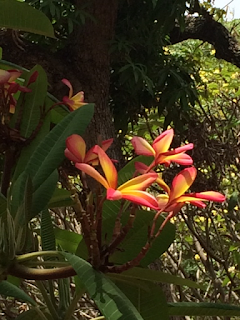 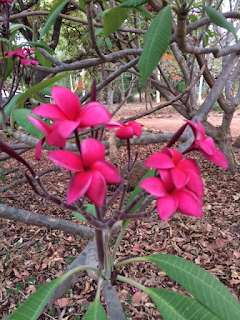 I tense, not just a little, when I hear some say that our time in Cameroon has been difficult. I understand it and I agree. There have been challenges with this new relationship. But something in that statement makes me want to shout. Negative talk never breeds life. Speculation that speaks from difficult past experience creates earthly vision. We are called higher than that and we are called to see through the eyes of faith that say nothing is impossible. That says light overcomes darkness. That believes mountains move and that Gods Kingdom is coming here on Earth. That believes that we have a part in God’s unfolding story. I refuse to cooperate with anything less.

It's about the journey and not just the destination. How do we represent faith, hope and love on the way?

It's all about relationships. Amongst each other, amongst our hosts in every nation.

May love win. Always. And may His Kingdom come here on Earth. 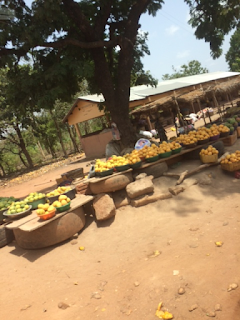 A few of the many million mangos we saw on our journey. 5 for about 50p


Posted by Nursie Kirstie at 12:37 No comments: